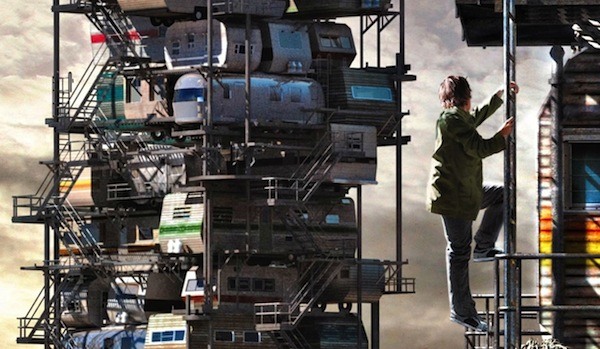 This book has been on my To Be Read list for a good couple of years now, and with Spielberg’s film adaptation just around the corner, it seemed like now was as good a time as any to pick it up. And it barely took me any time at all from opening the first page to logging off at the last.

30 years in the future, most of humanity spends all the time they can spare logged into the OASIS, a global virtual reality universe, to escape the harsh reality of their slowly dying planet. And when James Halliday, the mastermind behind the OASIS passes away, he leaves his fortune to the person who can solve the hidden riddles and puzzles he left scattered throughout the OASIS.

After years of searching, by millions of people, Halliday’s Easter Egg remains no closer to being found. That is, until Wade Watts discovers the first key in the puzzle, and the contest kicks off in earnest as thousands of players compete to be the first to find Halliday’s Egg, and the stakes are raised to new and dangerous levels.

Ready Player One is, in a word, a geekathon. It takes a nostalgic look on gaming and how far the industry has come since the early days of Atari, and back to classic coin-op arcade games. It seems timely, what with the world of virtual reality on the rise in the last few years, and the reality that Ready Player One presents to us 30 years down the line, doesn’t seem too far beyond belief.

Nostalgia is an overriding theme in the book, thinking about the gaming industry, and also the near constant references to 1980s pop culture – a strong knowledge of which is a key component in finding Halliday’s Egg. Halliday grew up in the 80s, and obsessed over the decade for his whole introverted life, so it makes sense that this plays a huge part in his grand Adventure (see, that’s a reference, like in the book). Like Halliday, our author Ernest Cline was born in 1972, so he also grew up with the same pop culture surroundings, and it’s very clear this work is his ‘Ode to the Eighties’. Though I imagine some readers have found the checklist-ing of an encyclopaedic knowledge of the 80s to be too dominating, and even too self-centred, for them to rate the book highly.

And yeah, it’s not perfect. Sometimes there are moments where it’s a little obvious – like who that mystery character is going to be revealed as, or what that strange object will be useful for – and it can be quite heavy-handed on the pop culture references, but I think that’s part of the fun of it. This will go down an absolute storm with children of the 80s, and even those of us nerds who aren’t, can still enjoy picking out the things we are familiar with.

It’s also interesting that the Hollywood adaptation is set for release next year, among the current influx of 1980s-reminiscing productions which have been gathering a big following. We had Marvel’s Guardians of the Galaxy, Netflix’s Stranger Things, and Atomic Blonde more recently, and now we’re set to add another the list, perhaps because the top brass are confident it will fit in with the current market?

Aside from being a geekathon extravaganza, Ready Player One is a great ride. Some areas take a little setting up and explaining (and I do not envy the expositional challenges that will cause when it comes to the film), but it sucks you in to the world of gunters and Sixers and pop culture, and it’s a thrilling tale. And, I think it will lend itself pretty well to blockbuster adaptation, albeit with some considerable challenges. Having now read the book, I’m excited to see it on the big screen rather than nervous, which is refreshing.

To sum up then, it’s a grown up geek kid’s dream come true, but it’s also a helluva lot of fun. I’d definitely recommend picking this one up, especially if you’ve got a little geek in you, and go enjoy the ride!